I drove myself out to Pai from Chiang Mai after hearing many accolades about this magnificent haven. Since I try never to miss a cave, the popular Tham Lod Cave was already on my list. Nearby were signs for several other caves as well that I noticed during a road trip excursion to a waterfall outside of town. So I figured I would check them out another day. One in particular caught my eye for some reason, Mae La Na Cave. I did a bit of research beforehand to try and learn about it, to which I was to expect a nice leisurely bamboo raft ride down a river through the cave. Yea, this was mislabeled and was actually a description of Tham Lod Cave. Want to know what it was really like? Think Indiana Jones.

The adventure starts just trying to find the place. It felt like looking for buried treasure. Although there is a sign from the main road, that’s the only one and it points off to nowhere. The only thing close is a dirt road that doesn’t look like a road. However, after maybe 6-8km of narrow, winding dirt road, I arrived at a gate at the top of a hill. I figured this was either a good sign that it was a place of interest, or a bad sign that I was on government or private property. There were no signs and just a bunch of Thai dudes sitting around hanging out. One of them came over and showed me a menu of 4 hikes and motioned for me to pick one. He spoke very little English so any questions I had about the experience were limited to answers around time and money. There were two smaller caves and then a 2 or 4 hour trek into Mae La Na. Unfortunately since it took me longer to find the place, I had to settle for the 2 hour trek, which was to walk halfway and turn around. So I paid the 300 baht and was ready to rock. The guy said a guide will come with me. A man then hopped right in the car with me and we drove down the hill into the forest.

Another several kilometers along a road built for one very small car would have us driving up close to vertical hills and windy passes until finally reaching an open area in the brush. My guide said, “park,” as he pointed to a clearing in the trees. At this point, I haven’t seen a single tourist or anything even resembling a tourist attraction other than the menu of options, and I am now parked in the middle of the woods with a local Thai who will be guiding me through this mysterious cave. He hops out, I grab my stuff, lock the door, and then notice something a bit peculiar. My guide is carrying a cloth bag and a machete is holstered on his hip. I was thinking to myself, “why in the world does he have a machete?!” While I felt pretty confidant I wasn’t going to be murdered in the middle of the forest, I couldn’t help but wonder. We started walking together and he handed me some sort of homemade snack and a headlamp. We were on our way. After maybe 10 minutes of walking, we approached a small opening in the rocks up ahead. 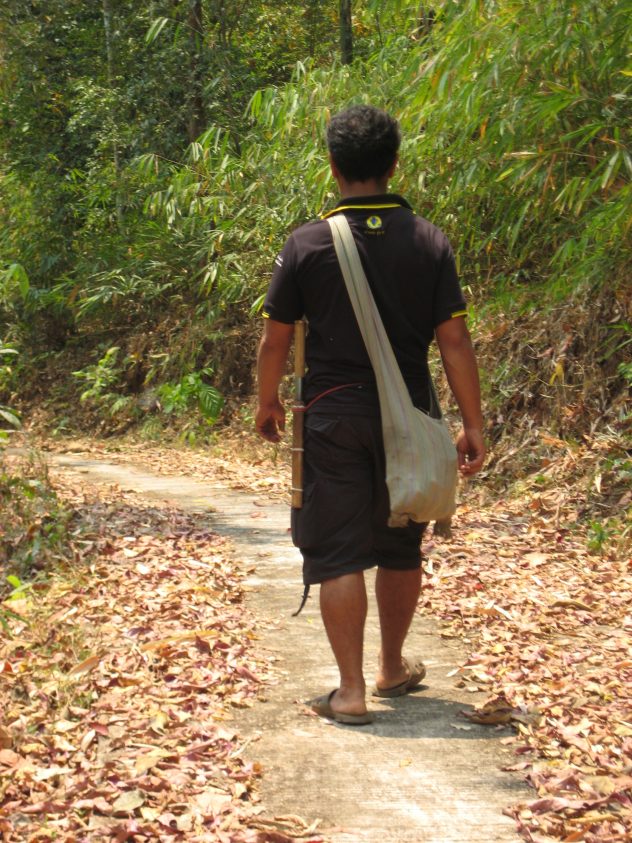 A rickety wooden ladder greets us at the entrance to the cave. My guide slides right down and I follow. Splash, right into the running stream. Keep in mind I thought we were going to be floating on a raft, but the experience would be the complete opposite. 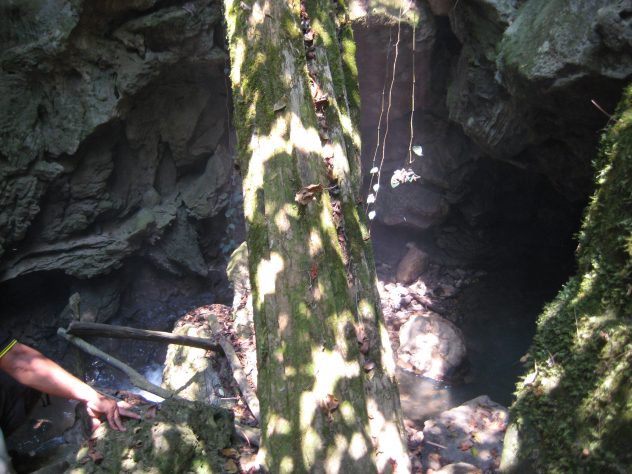 Darkness comes upon us as we walk deeper into the cave.  It doesn’t take more than a few minutes before we are wading knee deep through the water and then climbing up massive boulders. Inside, the chambers of the cave are massive and beautiful. No lights, walkways or anything you might see in a more touristy setup. Just me, my guide, darkness, and silence. Then we spot a visitor. 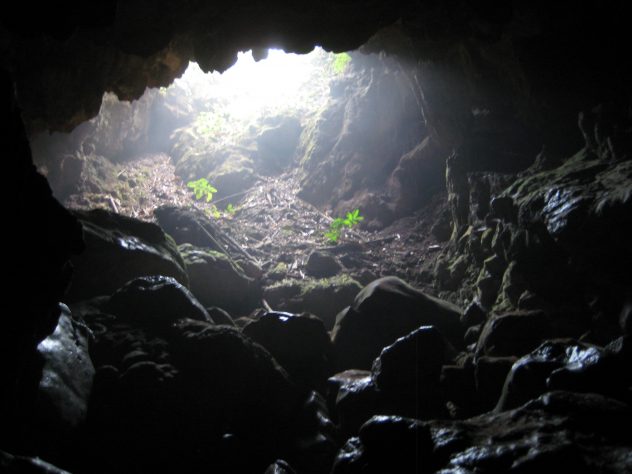 Continuing to follow my guide, he suddenly stops, turns his head, steadies his light, and points. “Snake,” he says. I turn to see a beautiful bright green snake to my left curled up watching us. The snake was a pretty good distance away and I thought “wow, how cool.” I was blown away at how clearly we could see the snake and it’s shimmering green color in complete darkness. I snap a picture and we continue. We pass some large spiders crawling on the ground, tiny shrimp swimming in the water, and bats flying over us and in the stalactite crevices no more than a few inches from our heads. We continue over boulders, balancing along “bridges,” small logs across boulders to cross deeper parts of the stream, and dodging stalactites. Kind of felt like those movies where there are spikes on the ceiling closing in on you as you wait to be rescued. 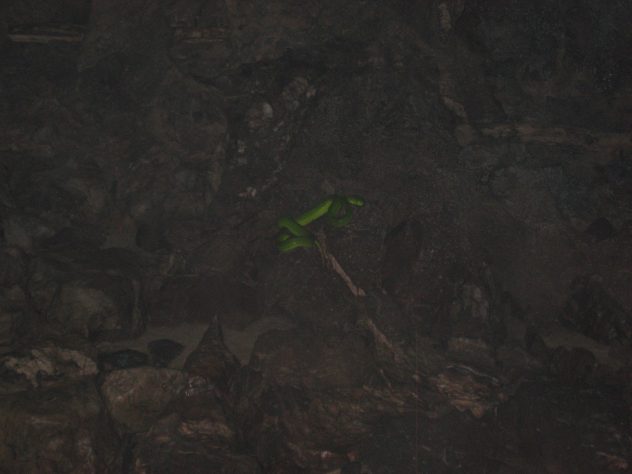 We reach the end, a chamber of dangling stalactites maybe 4 feet from the ground, explore a bit, and turn around. On our way back, the snake was still chilling in the same spot. I asked, “poisonous?” My guide said, “yes.” I was kind of glad I didn’t ask the first time. We climbed back up through the entrance of the cave to again see the bright sun welcoming us back from the underworld. A nice walk back along the river had me thinking only one thing…that was awesome! 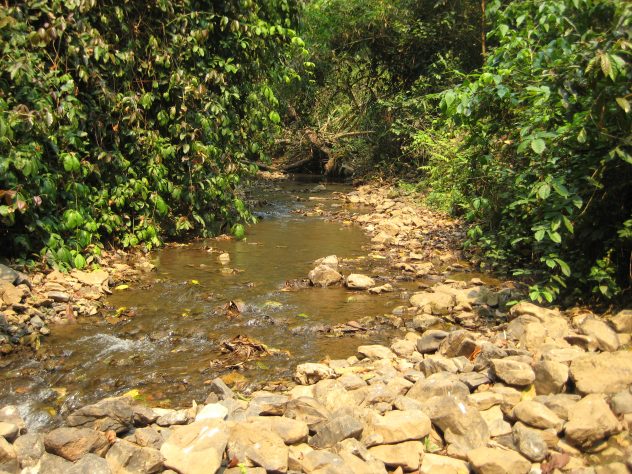 I was very relaxed the entire time through this adventure despite not knowing what I was getting into. I wouldn’t say anything was super dangerous, except maybe the snake, but it was certainly challenging. While I wouldn’t recommend this for everyone, I’d totally do it again. Next time all the way to the waterfall. It’s a good thing I was with a guide. If we had gotten separated, I never would have made it back out. There is no designated trail or path at all. Just you and the cave in all it’s natural, untouched beauty. This is the only cave I have visited that is as close to its original form as you can get. One of my favorite adventures on my 6 month trip to Southeast Asia.

According to information I found online, the cave is a distance of 12km and 4 hours roundtrip hiking if you go to the waterfall at the end. It costs 550 baht for the full 4 hours or 300 baht for 2 hours. Guide is required. Wear sandals or shoes that can get wet since you will be walking in the water. Don’t bring anything you’re afraid of getting wet. I had a small backpack and had to move everything from my cargo pockets to it, including my wallet, passport, cellphone, and car keys, as the water continued to get deeper as we progressed deeper into the cave. If you have a headlamp I would bring it, but one will be supplied otherwise.